Tom Bennett welcomes your comments, criticism or suggestions.  Contact him by sending an email to:

How to Buy Books .

In January 2019  pieces of wreckage showed up on the beach when sand levels were low.  Sand levels were lower in 1985 when I measured and studied the wooden hull, capstan and one bow anchor then to be seen. I concluded it was a heavily built collier of the type built in Newport Pembrokeshire around 1850.  Looking through my records I now am convinced it is the schooner ENTERPRISE  built at Llansantffraid, south of Aberystwyth in 1830.  With just three on board the schooner was caught out in a strong ESE force 6.  Dublin registered she was taking coal from Swansea to New Ross. She ran on to Barafundle sands in a gale on  21 December 1907.  At high water the surf smashed into the stricken vessel, waves completely covering the wreck.  The three men climbed the rigging where one man died of hypothermia.  When the tide dropped the other men could climb down on to the sands and go for help.

I originally thought it may be a Bangor schooner named the FOYLE PACKET. Coflein CADW has mapped it as the smack FANNY, but I think it should now be identified as the ENTERPRISE, the Irish schooner built in Wales (registered ship no. 16441) 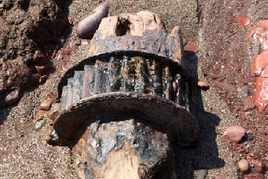 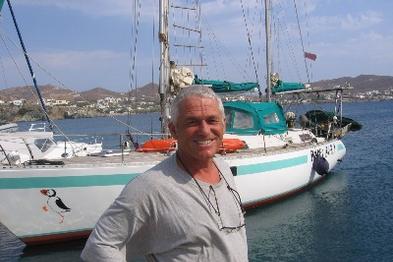 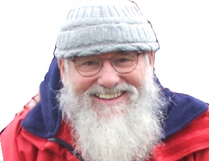 Tom with his yacht in 2006.  The picture is taken in Greece just after sailing from the Philippines.  If you fancy  some quality time sailing this 44 foot ketch now namedMonty B you can now do so in Montenegro,  book with

​
Tom, once a man of the sea with a salty beard he is now an expired explorer, with plenty of memories and long white hair.   Tom has spent a lifetime, researching, locating and identifying shipwrecks.  He has written over a dozen books about shipwrecks.  A professional dive boat skipper in Myanmar, a yacht race skipper in Thailand, and an RYA Sailing Instructor in UK, he once spent five years continously afloat on cruising yachts. Tom has dived in ten different countries and sailed cruising yachts through icebergs in the Arctic, sand cays in the Great Barrier Reef, Panama Canal both ways and the Suez Canal.  His SEA GUIDE TO PEMBROKESHIRE is regarded as the best pilot book on West Wales and his Cruising Guide to Philippines, one of the most comprehensive ever printed. For the last few years Tom has produced two books per year.  During 2017 two books, MARITIME HISTORY OF NEWPORT PEMBROKESHIRE and TY GWYN AND THE BRONZE BELL WRECK.  In 2018

In 2019, Tom, growing a long white beard, started writing books about the Neolithic in Pembrokeshire.

Wooden capstan and iron gear, remnants of the ENTERPRISE  on Barafundle beach in 2019.